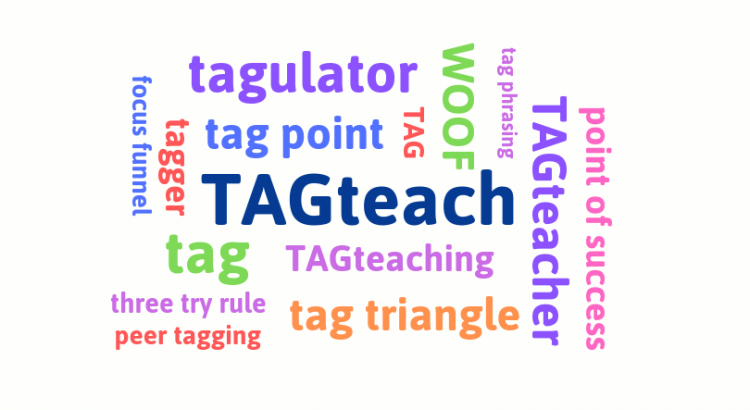 This list shows the way that the terms should be written in a sentence. Regular capitalization rules apply if they’re used in a heading or title.

Take an hour and learn about the basic terms and how they all work together as part of TAGteach in our free online course: Fundamentals of TAGteach.

The field of science from which TAGteach and other reinforcement-based teaching and training technologies have been developed.

Physical activity in general; or a specific movement or group of related movements (‘a behavior’).

Any stimulus that has acquired positive reinforcing properties through association with other reinforcers such as food, praise or success.  [The tagger is a conditioned reinforcer -providing a positive stimulus that occurs simultaneously with a desired act or response.]

Mental fatigue that occurs when a tag session is too long for a particular learner.

A technique used in planning and teaching.  Beginning with a broad lesson, information is reduced into more concrete directions and then reduced again to a precise tag point. (Also see reverse focus funnel)

Short for differential reinforcement of incompatible behavior (DRI). Eliminate a designated behavior by strengthening other behaviors that are incompatible with it.

A behavior to start or to repeat, for which the student is guaranteed a tag.

A procedure in which a behavior is paired with a desired stimulus or event that will increase the chance of the behavior happening again in the future.

Deliver the least amount of information necessary for success first (tag point). Once the behavior has been accomplished, and the learner is more confident, additional information can be delivered.  This is useful in situations where too much information may overwhelm the learner and cause a loss of concentration.

An operant learning procedure in which small increments of a desired response are reinforced.  By reinforcing some small response, and then selecting stronger or longer occurrences, one can ‘shape’ or build a more elaborate behavior.

Something in the environment that can be sensed – a sound, an object, a color, etc. A discriminative stimulus is something the learner can perceive which indicates an action to be taken (for example a red light is a stimulus to step on the brake).

Something which “marks” or identifies a desired action. Typically a TAGteach marker emits a brief, distinct, uniform stimulus used to pinpoint movement as it is happening; a click from a ball point pen, a clicker, hand clap, a finger snap. Some Smart phone applications provide appropriate marker tones.

The specific aspect of a behavior that when/as performed will receive the audible mark (tag). (see WOOF for tag point criteria)

The three components of the TAGteach process: Identify, Mark and Reinforce.

TAGteach is a protocol that promotes positive interactions for increased productivity and success. The acronym TAG stands for Teaching with Acoustical Guidance and refers to the audible marker, a key tool used in the system designed to highlight success. The TAGteach protocol also includes tools to deliver information, reduce inefficient language, assess performance, create confidence and deliver positive reinforcement.

A device made from beads that slide on a string that allows the teacher or learner to keep track of the number of tags they have earned or given.

If a learner fails to perform the designated tag point three times, the teacher creates and delivers a more achievable tag point.  The three try rule is more of a guide than a rule. Some learners want to work things out for themselves and will try several times without getting discouraged. Others would rather take very small steps forward and succeed nearly every time.

A single tag point in which more than one problem may be resolved.  (e.g., The tag point “keys in pocket”, would keep the keys from being misplaced and from being locked in the car.)

The acronym defining the four criteria for a tag point: What you want, One criterion, Observable and definable, Five words or less