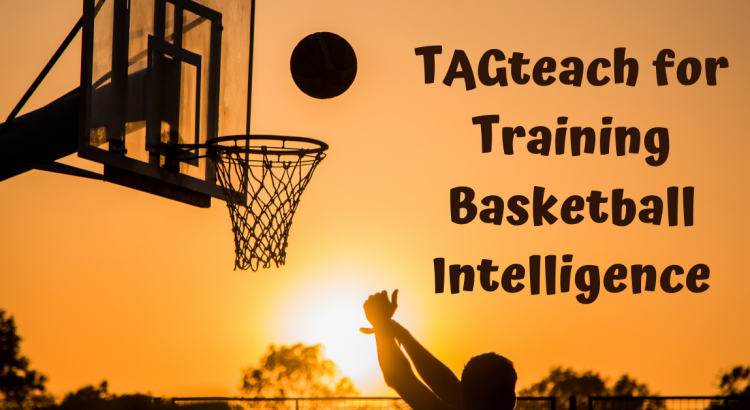 Imagine a 3rd grader dribbling up the basketball court in a live full-court 3on3 game, driving to the basket, reacting to a defender and making an assist to a teammate. Now imagine that this player had never played basketball before 6 weeks ago….

Unthinkable you say? Well, not with TAGteach!

I have spent 14 years coaching basketball in a variety of roles, but have always returned to player development as my favorite way to provide lasting value to kids. I grew up being homeschooled, and have always been an advocate for self-directed learning, free play, and experimentation as the best method for kids to motivate their exploration of the world. The most rewarding thing I can do is to guide an already motivated learner on their path to achieving their goals! I have always been very positive and encouraging of player attempts, but like most coaches I always struggled with the ability to concisely communicate instructions to young players when teaching complex concepts and skills, inevitably leading to their boredom, and my frustration.

I started my own business called Play>Practice Basketball in 2018 to address the need for precise 1on1 coaching for all ages (we have worked with ages 3 to 42 so far) and to specifically focus on the K-5th grade age groups which I found to be most underserved by basketball instruction. The primary issue I discovered for the younger age group is that the average volunteer parent or coach has no way to translate high-level basketball skills and concepts into the most basic parts without contradicting what they would later teach the same players as they progressed (e.g. learning to dribble around cones placed on the floor, later being chastised for not having eyes up).

Being a stickler for consistency, I set out to solve that problem through experimentation….

My TAGteach adventure began in May 2018 when I completed my Level 1 TAGteach certification, and I that fall I began an after school enrichment program teaching basketball skills through a games approach, combined with tag points. The philosophy was based on a book by Alan Launder titled Play Practice, detailing a method of teaching all major sports through the games approach. I made it my own and added what I call the “Practice Sandwich”, modeled after the whole-part-whole method, by starting and ending each session with a game and breaking down the skills used in that game during the middle, or “meat” of the practice. This format accomplishes several things, A) it gives players an incentive to arrive on time to get in the first game, B) allows the pent up energy from a day in the classroom to be used constructively, and C) gives the coach a chance to evaluate which skills and concepts have been retained from previous sessions, and what still needs work. The final game of the day is always the favorite, where players are able to apply what they just learned (and whatever else they come up with) during a semi-formal game with the coach acting as referee. We made our Play>Practice logo a bit ambiguous to support the games approach concept by using the “greater than” sign between play and practice and leaving the reader to interpret it as they wish – most commonly “play before practice” or “play is greater than practice”.

The last 2 years have been a great learning experience for both myself and my assistant coach as we have experimented with various game structures, tag points, prizes, and progressions of skills. We found that our coaching approach had to drastically change to ensure that all drills, games, tag points, etc were always game-relevant, and would not be contradicted at a more advanced level of play. Working with ages that are easily overwhelmed in a chaotic sport, and may have difficulty performing the basic skills even in a calm environment, we discovered that by starting with the conceptual context of a game (beginning with 1on1), we were able to quickly increase the player’s enjoyment of basketball practice. By presenting skills in a practice setting as solutions to the problems recently encountered during play, players were very motivated to sustain a focused effort practicing skills that would otherwise seem boring. The need for “tagging” an individual skill in a controlled practice setting was eventually overtaken by the positive reinforcement of achieving success in gameplay, allowing a rapid progression across multiple skills within a 6-week program.

What’s next? We have recently undertaken to codify our work into a curriculum that will be used to standardize our practice pedagogy for K-2nd and 3-5th grade age groups, and we are reaching out to elementary school teachers to begin their training through the TAGteach online course, followed by our own coaches training curriculum and hands-on training during our summer camps to prepare them for the fall school season.

If anyone is interested in basketball or TAGteaching individual or team sport concepts, please get in touch with me at info@play-practice.com I am always happy to discuss anything relate to this topic!

Learn More With Us!

Join us for a live webinar with TAGteach Co-founder Joan Orr and Coach BJ Mumford This will be recorded, so if you miss it you can access it from the same link. The live version will be priced free-$20 and the recording will be $5-$20 (pay what you can in both cases).

Register for the Webinar