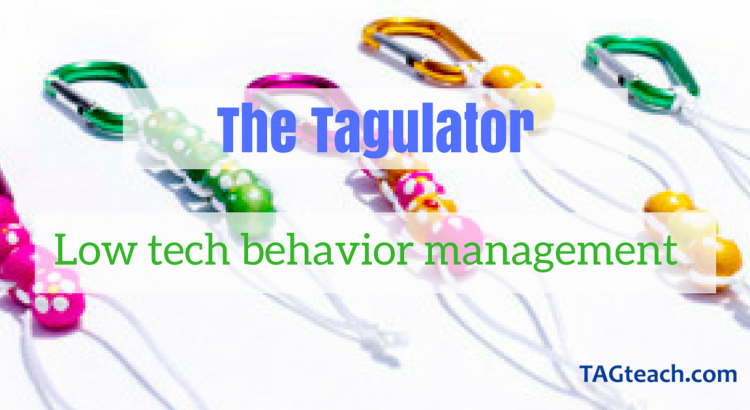 I want to introduce you to a fascinating and inexpensive piece of low-tech equipment that can help you effect magical behavior change in yourself or others. It’s called a tagulator. A tagulator is a specially strung string of beads that you can use to reinforce your own or someone else’s behavior. There’s something appealing and comforting about the way the beads slide down the string that makes everyone love to pull the beads.

The tagulator is a wonderful adjunct to the actual tagger and you can also use it with or without a tagger. Each pull of a bead is effectively a tag.

Unfamiliar with TAGteach? Click here to learn about the basics.

In Pursuit of Domestic Bliss

In pursuit of domestic bliss, TAGteacher Leslie Catterall turned to TAGteach and the tagulator to teach her husband to take the recycling off the kitchen counter and into the bins.  “I explained my situation and my understanding of his. He told me that there was no malicious intent in his forgetting to recycle; he’d simply got into the habit of leaving the bottles there, a behavior that was hard to change when he was tired and focused on other things. What an eye-opener that was to me. And since then I am seeing more and more how much of the behavior with which we are dissatisfied stems from patterns of repetition that are hard to break simply through being told.” Leslie and Martin engaged in a mutually agreed upon experiment where Martin would tag his own behavior and pull down a bead on a tagulator mounted in the kitchen every time he took the recycling out to the bin. The experiment was a raging success and Martin quickly accumulated 67 tags recorded on a set of 2 tagulators. Asked why he still continues to do it he said, “it’s about presence of mind, committing to the whole process breaks the habitual behavior”. When pressed further he put it this way: “even though I’m the only one recognizing it, it gives me a nice feeling that I am being recognized for doing it.”

Here’s a video showing how you can use a tagulator in this sort of situation. The couple in this video each have their own tagulator placed in strategic locations to help promote desired behaviors that they have identified. Whoever finishes a tagulator first gets to pick the next movie or TV show.

How to Make a Tagulator

Here’s a video that shows how you can make your own tagulator.

Sometimes just pulling a bead down is enough reinforcement to strengthen a new behavior, but sometimes tangible reinforcers are required. Some learners need to have a candy or token or other tangible item after every bead, after every few beads or at the end of a tagulator. If you’re giving tangibles after bead pulling, you can make patterned tagulators to modify the rate of reinforcement. Here’s a video that shows how tagulators work with Skittles as reinforcement. There’s no specific behavior being reinforced in the video. This is just a demonstration of the tagulator mechanics. The sequence is teacher tags > learner pulls a bed > teacher delivers a Skittle. You can see how different bead patterns modify the rate of reinforcement with the Skittles.

Not Just for Errant Husbands

Tagulators are not just for adults. Kids of all ages love them too!

Here’s a video that shows how to introduce the tagulator to increase teaching efficiency. This child has up until now received a reinforcer after each tag. Sometimes it has been stickers, beads or melon pieces, but he’s most interested in Skittles. It’s often disruptive to the smooth flow of a lesson to stop and eat a Skittle after each tag. The tagulator provides a great way to reinforce without stopping to deal with the primary reinforcer. Lear is 4 and this is his introduction to the tagulator. Notice that he has no problem with the drastic reduction in the number of Skittles he’s getting. Formerly he was getting 1 Skittle per tag, now he’s getting 1 Skittle per 10 tags. Clearly it’s more about the game than about the candy for Lear now.

He sometimes wants to stop and count remaining beads to see how far he still has to go to get a Skittle, but he doesn’t object to the the 10-fold reduction in Skittles. The tagulator is fun too.

Note how matter-of-fact the teacher is here. She doesn’t cajole or ask him if he wants to use the tagulator, she just tells him that this is what we are doing now and then she does it. She has a good history of reliability with Lear and he likes and trusts her. He also respects her because she sets the expectations, she’s clear and she’s consistent. Lear is tag savvy and is very clear on the concept of TAGteach.

The Applications are Endless

People are using TAGulators all over the place. TAGteacher Amelia Bower posted on one of our Facebook groups recently:

“I had two lovely TAGteach-inspired moments this week and wanted to share.

1) At the ABA clinic where I work, we started a Direct Instruction program with a young learner. She seemed a bit bored by the instructions at first, but when I added a clicker and a tagulator, her interest was piqued and the program ran very smoothly.

2) I also tried out a tiered reinforcement system, with staff members! I needed to increase the frequency of checking to see if workspaces are clean before leaving a session. I added a visual prompt, asked therapists to initial a poster before leaving the room clean, and I’m collecting initials and awarding puzzle pieces as we accumulate each week. When the puzzle is complete, management will provide a huge snack stash to therapists. We rolled out this intervention yesterday, and the feedback has been very positive!

I’m so glad I pursued this training!“

Veterinarian and TAGteacher Linda Randall told us about her use of the tagulator in the vet clinic:

“There is a tagulator by one of the telephones. My initial idea for this tagulator was to use it  for myself. I wanted to slow down and truly listen to my clients rather than rushing to tell them what I wanted them to hear, then getting on with my day. When I relaxed my shoulder muscles as I listened, I would “pull a bead”. After 10 beads I would do something rewarding for myself. Soon this morphed into “pulling a bead” every time I overheard a staff member say something compassionate or service-oriented to a client when using this particular phone. Then anyone could “pull a bead” for anyone else for a client or pet-centered phone phrase. The tagulator became a team effort and we needed a second tagulator to mark the completion of the first tagulator so we could get pizza after 100 secondary beads! It worked, and is working, wonderfully.”

Tell us in the comments what you use your tagulator for. Please post photos of your tagulators and stories about how you use them on our Facebook page.

Join us at The Convergence of Human & Animal Training and Technology Conference to meet some of the most influential people in the world of behavior working today. Geek out with your fellow behavior nerds and find out the latest thinking and learn about the coolest tech going in behavior applications.