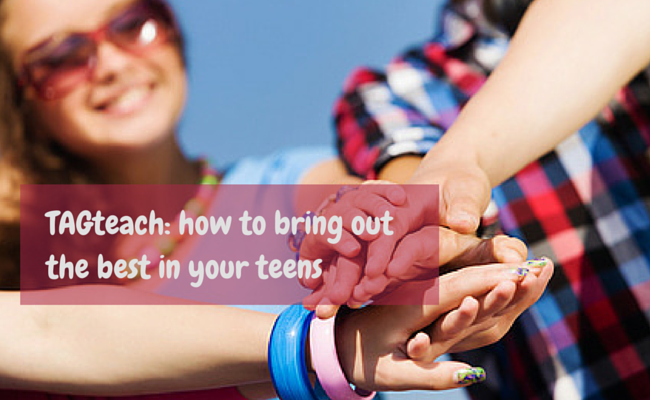 Reprinted with permission from the KPCT blog

I’m part of a group that runs a 4-H dog camp each summer called The Ohio 4-H Teen Dog Experience. A group of teens from all parts of Ohio spends several days with their dogs and new friends in an intense dog-training environment. Eleven 4-H’ers and their dogs attended the four-day camp in June, 2009.

Kids come from different areas of the state, and have varied experience levels coming into camp. Some campers are from 4-H clubs that do not even offer obedience or agility, and other campers compete extensively outside of 4-H. Most campers belong to clubs that do not use clicker training. However, all of the campers were enthusiastic about dogs, 4-H, and learning how to be a better dog trainer.

For several years, we have worked on ways to reinforce the teens attending the dog experience camp. After attending TAGteach seminars and working hard to strengthen our plans for camp learning, things went even better than we expected this summer.

In past years, raffle tickets were passed out for participation, helping others, and demonstrating good training skills. It was difficult to carry the tickets around, not to mention distributing them without interrupting a lesson. More than once, a piece of hotdog was offered to the kids and tickets were given to dogs! This year, every camper made a ten-bead Tagulator TM (an ingenious and very cool way to keep track of the many tags earned) to use throughout camp. Moving ten beads on the tagulator to the “I did it” end of the tool earned a camper a raffle ticket. The kids would probably have found tagging reinforcing enough without a raffle, but our end-of-camp raffle has become a tradition.

Throughout camp, clicks or a “thumbs up” were used to tag the kids. During lessons with dogs present, we were more likely to use a “thumbs up” or a verbal tag, but during our many non-dog activities, a tagger could be used. Kids were encouraged to tag each other, and often did.
We noticed that while kids sometimes forgot to bring a piece of equipment to lessons, they very rarely were without the tagulators!

Early in camp, we did several sessions on creative problem-solving where the kids had to work together to solve tasks using a limited set of materials. We talked about how problem-solving could help with writing a training plan and solving training challenges. The lesson was not that the kids were able to accomplish the task at hand, but that they learned to brainstorm completely different solutions for any one challenge.

Throughout camp, we would TAG kids for use of creative problem-solving—resulting in more improvement than we anticipated. Some solutions they came up with were fabulous: move the target closer, walk the sequence without your dog, use our invisible dogs, tape the target to the floor. Of course, the kids moved on to brainstorming creative ways to get revenge on each other—and each other’s cabins!

One thing we made a point to TAG was the use of technical training vocabulary. Initially, we would TAG when any “training words” (timing, fluency, cue, front cross) were used. As camp went on, vocabulary tags were earned more for using training words in context. It was difficult to control my enthusiasm when the kids would offer suggestions:
“Maybe we should break it down.”
“The latency is poor.”
“The cues are similar—how does my dog tell them apart?”
“Let’s use back-chaining!”

Cooking projects are a traditional part of 4-H. However, our campers come primarily from dog clubs and many have not experienced cooking-project judging and the associated lesson “learning how to do place settings.” The place setting project is a great activity for teaching the campers about back-chaining, and is also an opportunity to learn a new skill.
Our brilliant Teen Counselors led the activity and directed the campers through the process of creating a place setting for a meal. The directions from the Teen Counselors specified the items to remove, the order in which to remove the items, and the requirements for different meals. Campers practiced setting and clearing the tables, placing cleared items in their laps to be ready for the next round. When cued to “return items,” the campers would return the items in the correct order. A sample set of directions read as follows:

After ten minutes of training, the campers were able to set up three different place settings on different cues (breakfast, dinner, and dessert)—all with accuracy.

With a little rivalry between the two cabins of campers, there were many opportunities for competition. A dumbbell-throwing contest quickly found its way into our curriculum.
Both teams grabbed some dumbbells and spread out for fifteen minutes of strategy and practice. After a few throws, we noticed that one of our campers was very accurate. We watched him make several throws, and then created some TAG points based on his technique. With suggestions like “Let go at shoulder height” for when to release the dumbbell and “Straight arm when releasing,” the group was throwing more consistently immediately. Performance did deteriorate under pressure; we’ll add some activities next year to improve responses when stressed.

Teenagers sometimes have the reputation of not being helpful. But, a few tags for various household tasks had the kids on top of everything. The doors stayed closed. The trash was emptied regularly. The kitchen area stayed clean. Buckle collars were on all dogs.

Soon the campers were going out of their way to assist each other with tasks. This might have been expected when the kids were comfortable with what they were doing, but it was completely unexpected with new tasks such as tracking. All eleven campers were learning tracking for the first time. After the first day, they would offer to help each other set tracks, which really surprised the instructor. The campers worked to get each other to participate in all activities, and continued to problem-solve on their own.

See you next year!

TAGteach and good lesson plans had a huge positive impact on camp this year, and on the progress each camper made within only a few days. The kids were happy to TAG each other and the instructors.

Check out this snippet from a webinar with lots of tips on how to use TAGteach to motivate teens, teach new skills and most of all make sure everyone has fun at camp!