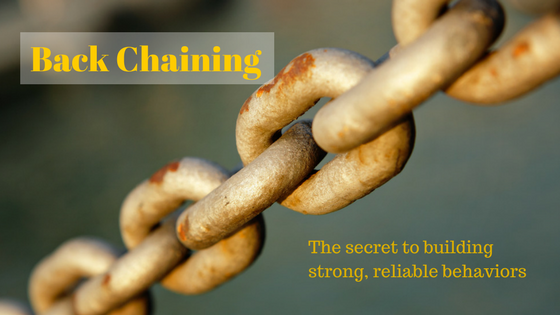 Professional trainers and professionals with advanced degrees in Applied Behavior Analysis know about the trainer/teacher’s secret weapon for extreme reliability. That is… back chaining. If you are a teacher, coach or parent who teaches skills to others, you need to know about this too!

Back chaining is a concept foreign to many and counter-intuitive to most who first learn of it. We want to talk about it briefly here, because it is a very effective way to build highly reliable behaviors and it is one of the key techniques that any TAGteacher should understand and apply properly. A reliable behavior is one that looks the same each time the subject performs it. For example, with forming the letter “E”, we would consider the behavior to be reliable if the child drew the letter the same way every time and the letter was drawn correctly.

Back chaining involves teaching a skill starting at the end and working back to the beginning. For example we would teach a child to come down the ladder to the climbing structure safely before teaching him to climb up it. This way we know that once he climbs up he will be able climb down. To do this we would place the child on the bottom step and work on taking one step down to the ground until he is confident with that. The we would place him on the second step and work on coming down two steps. After a few steps he would be confident with coming down and we could start working on going up and then coming back down. By teaching the last part first the learner is always moving toward the part of the skill that he learned first and with which he is most confident. The gymnast that learns her balance beam routine from back to front will not be worrying about moving toward the part of the routine that she has practiced the least, she will be confident that she is less likely to fall as the routine moves forward. The pianist who learns the last part of the piece first will be moving toward the part he has practiced most and with which he has the greatest confidence.

Here is a video that shows a very simple application of back chaining. This is the formation of the letter “L”. We taught the right to left stroke of the bottom part of the letter first using a template that already had the down stroke completed and with red and black dots to guide the cross stroke. The tag point is “red to black”. The child is to draw a line from the red to the black dot thus completing the letter correctly and with the pen stroke going in the correct direction. After practicing this until he was confident, the next tag point was also “red to black”, but this time completing the dots created the down stroke of the L. Notice in the first trial with down stroke he goes on to finish the letter without any instruction or prompting. Because he had learned the last part of the letter first he naturally went on to complete it by doing the behavior that he was first taught (i.e., the cross stroke). This is a very nice demonstration of the power of back chaining.

Many of you have already seen our high jump video. This is a very complex skill that involves simultaneous rotation about two different axes and incorporates the transfer of power from the run to the jump. How could we teach something this complex backwards? Watch the video again (or for the first time) and see back chaining in action with a complex skill.

Learn More About Back Chaining

To learn more about back chaining, check out our recorded webinar: 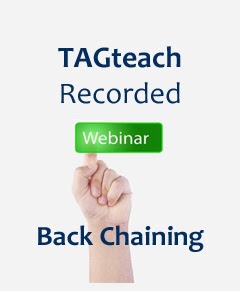 Share the post "Back Chaining: The top secret teaching tool that is the key to professional success"

8 thoughts to “Back Chaining: The top secret teaching tool that is the key to professional success”