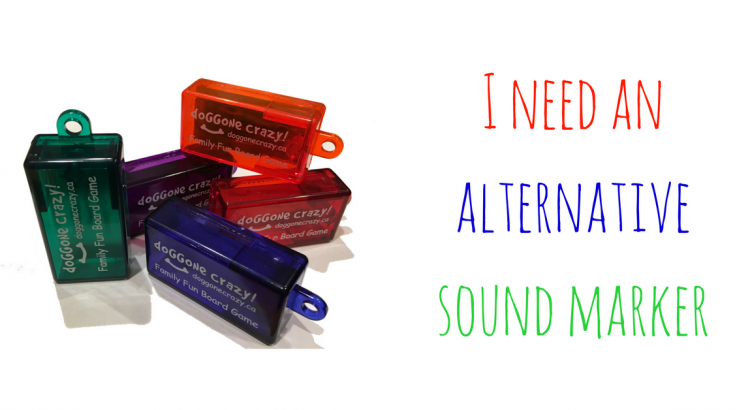 A topic that seems to come up with some frequency in our interactions with TAGteachers relates to the sound of the tagger and what kinds of sounds (or other stimuli) can be used with TAGteach. Here is a sampling of some of the concerns that have come up:

Let me preface this discussion by saying that in all the many years and many applications in which the TAGteach founders, faculty and experienced TAGteachers have used TAGteach, we rarely use anything other than the traditional box clicker (tagger) to make the tag sound. We have tried other things, but in the end they break, we lose them, or they didn’t work any better anyway. Even with children diagnosed with autism, noisy roomfuls of kids tagging each other and in the presence of clicker trained animals, we have had great success with the box clicker – as have others.

In trying to decide the best way to deliver the tag stimulus, a TAGteacher needs to consider the following:

Does the Learner Perceive the Tag?

We have often been astounded that learners hear their own tag even if there are lots of other taggers and other noise going on. If they don’t hear their own tags, then you might need to spread out more, change the position of the person with the tagger so they are closer to or within the line of sight of the learner or take turns with tagging so that fewer taggers are going off at once. You will most likely find that once the learners become tag savvy, they don’t have any trouble hearing the tag that is meant for them.

Does the Learner Like the Sound of the Tag

Some learners find the tag sound aversive. This is more often true with adults than kids. They may dislike the sound for no particular reason, may experience physical pain (very rare) or may have a past negative association with the sound. Generally they will not suffer in silence and will be quick to let you know that you are causing them grave suffering. Sometimes this aversion can be remedied by associating the tag sound with a tangible reinforcer (candy, stickers, chocolate etc). Sometimes they get over it when they see others progressing well and the want to have some of that success for themselves. The tag sound has not been a problem for professionals working with children diagnosed with autism. These children seem to adapt well to the tag sound, most likely because it is associated with a primary reinforcer (popcorn, a sip of soda etc) and because they quickly learn that this is the sound of success and something that they can control in an otherwise largely uncontrollable world. This latter is just speculation, since we haven’t conducted any studies, but it has been a surprise to some to find that sound-sensitive children are not bothered by the sound of the tagger.

Is the Tag Distracting Other Learners?

The tag sound is generally not distracting to other learners who are also engaged in the tag session. For example a roomful of gymnasts or volleyball players all tagging in pairs or groups will not disrupt the others. They get very good, very quickly at concentrating and hearing the tag that is meant for them. In a quiet situation in which a teacher is tagging one student for reading skills, while the others work quietly, the tag sound could be distracting, so muffling the sound or using something quieter may be best.

Many people are using TAGteach to teach animal-handling skills. In the majority of these cases the animals are clicker trained, or are being clicker trained and so the tag for the person could be distracting for the animal. Some people are concerned that the power of the click will be diminished if the animal hears a lot of clicking and doesn’t get a treat. People who teach group clicker training classes, train animals in a group situation or have multiple clicker trained animals at home know that animals very quickly learn that not every click is for them and not every clicker session involves them. They learn to read environmental cues, pay attention to where the trainer’s cues are directed and most importantly to where the treats are coming from and where they are going. Animals become very good at knowing when it’s their turn.

When animals are first learning about clicker training, or if the animal is likely to get excited and become a danger, then an alternative approach is needed. This may involve using a different sound or working on the human skills with the animal out of the picture at first. In some cases it may be appropriate to have the click and the tag be the same. For example, if you are teaching loose leash walking and the tag point is “leash hand at waist”, then both dog and person could get a click/tag at the same time. If the use of TAGteach for teaching animal handling skills becomes confusing and problematic, then you need to take steps to simplify. We always recommend that the animal be out of the picture until the person learns the skill.

But I Need an Alternative Signal!

Sometimes you really may need an alternative signal for the tag, whether it be a different sound or a different signal altogether. Here are some alternatives to the traditional box clicker (tagger) that have been used or suggested by TAGteachers:

Here is a video that shows a shoulder tap being used as a tag: